Travel isn’t all unhinged hedonism, getting fucked up and losing your way back to the hostel. Sometimes the road confronts you with truths about just how cushy your existence has been, and they can be harder to swallow than you might think…

I left L’viv on the overnight train to Odessa, full of renewed enthusiasm for my trip. I had organised to stay with George the day before and was looking forward to seeing what Odessa’s coast and the Black Sea had to offer. The train was stoically minimal and as comfortable as it needed to be, but I was soon singled out as a foreigner and beset by a maniacal simpleton keen to know how much I earned and why I had come to Ukraine.

As someone who has struggled with the handicap that is articulating yourself in a second language I try to be charitable when dealing with poor English – but her questions about wealth and wide-eyed gibbering had me uncomfortable and ready to reconsider my position. Fortunately a young student with better English than my assailant intervened, and through him I was able to verify my suspicions of lunacy – for even in Russian the specks of spittle failed to abate and he was soon as confused as me.

After what felt like a suitably polite length of time I was done tolerating her inquisition. I made my excuses, retired to the top bunk and was soon lulled to sleep by the pulsing rhythm of the tracks. 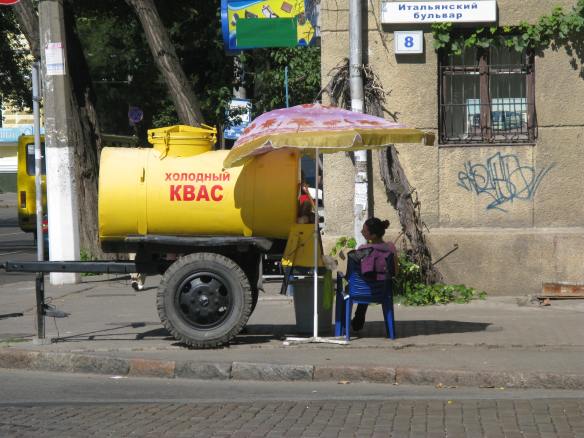 The train pulled in gently under the warm sun of an Odessa morning. George met me at the station and we set off to catch a bus to his house and drop my bags. He was a friendly fellow and enthusiastic at the prospect of showcasing his city to me. He was obviously pretty enthusiastic about food too and his large beer gut made for an amusing sight as he manhandled my bag off me.

The bus was tiny, as if a normal bus had been put into a trash compacter and saved at the last minute, free to continue a stumpy existence. We crammed in with my pack, sweating in the close confines as it wound its way through the town and out into the suburbs. It took considerable longer than I was expecting and as the more opulent buildings gave way to factories and warehouses I realised that George’s claim of living in Odessa was tenacious at best.

Eventually we were there, ascending the rickety lift to his family apartment in Korsuntsi, just one in a number of towering buildings on the outskirts of the city and a council housing project if ever there was one. George’s flat was on the tenth floor, a brown door nestled amidst the collateral of family living that crowded the narrow hallway. With my lack of Russian embarrassingly painful I introduced myself to his mother. She was a gargantuan woman, barely contained by her stained singlet, and George’s youngest sister perched precariously on her hip.

The apartment was small and cluttered. George and his brother had their own rooms but his mother and father shared the living room with his two younger sisters.  The lino was peeling off and the bottom of the shower base was cracked beyond repair. Discarded tricycles vied with shoes and old couches for what little available space there was and I wondered what George would have made of our flat back home.

I took it all in my stride but it was painfully obvious that this was a poor family – despite their hospitality, I felt like an imposition. Who was I, to bludge off their kindness, when I could have paid my own way?

When dinner time came we crowded round a tiny table in their kitchen and ate tomatoes slathered in basil and mayonnaise, potato salad and the ubiquitous borsch. I was plied with glasses of the frightening komput, an apple based drink stored in ominous jars with pieces of fruit floating in them. It had the colouration of kool aid and a surprisingly refreshing taste, despite the decomposing nature of some of the fruit.

For some unknown (and unexplained) reason George had disappeared while I was in the shower and I was left to fend for myself little more Russian than priveet and spasiba. In broken English we established that I had a family of similar size in New Zealand, that we too ate food, and that I could eat pig fat on a dry cracker without vomiting. How anyone is convinced that this is a delicacy is beyond me, but with my test complete I was free to go and seek the respite of George’s room and my book.

Or so I thought. With George and his strict looks gone his younger sister grew bold. I was soon holed up on George’s bed and subject to the joys of cross-cultural charades and google translate while his sister showed me pictures from their family trip to Israel. I couldn’t quite figure it out. They certainly seemed poor: living six deep in a small apartment and eating what was essentially peasant food, their diet filled out with donations from George’s grandfather’s rural vege garden – but despite this could still afford to travel? It was just one more puzzle in a land of many.

George was a law student and through his work as a judge’s clerk had a resigned understanding of the corruption that hamstrings Ukraine. In what was one of the singularly most heart-breaking moments of my trip he took me to visit a new mall, and we walked around the shiny shops examining all the things George couldn’t afford but which are so common to us. 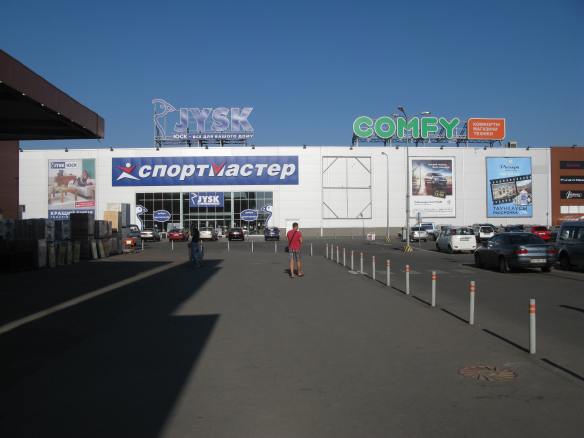 I hadn’t the heart to tell him that malls like this were par for the course back home, considered a blight even, and felt that my feigned enthusiasm must have seemed as transparent as the plastic that wrapped his desires.

It was like going back to a time when the promise of capitalist happiness rang true and believers flocked to buy the latest gizmo set free from Madison Avenue. I couldn’t tell him these trappings would do little for his happiness in the long term, that in worshiping these idols he was setting himself up for a vicious cycle of consumer recidivism, devoid of substantive satisfaction.

So I didn’t. Who was I to challenge his aspiration? The dream itself brought him happiness; perhaps that in itself was enough.

It was certainly how the model perpetuated itself: if you can’t make, fake it – let the dream be your opiate (while the oligarchy grin in the shade of ever-increasing fortune). And in Ukraine, there wasn’t just an oligarchy – but they were so secure in their position that there was little need to be shy about it. Just beyond the mall the Rich were building their own town, with horrible prefabs and a private beach to match (some consolation, that there might be a vacuum of taste in the presence of such wealth).

George told me that the average salary for a government official was 150USD a month. With corruption this could balloon to as high as a 1000USD a month, week, or even day. While you might question the accuracy of these numbers (I certainly do), the details don’t really matter. What is shocking is the magnitude of the difference, and how it affects life in this former Soviet state. George alleged that the corruption was well established in the schooling system too, with the wealthy’s offspring in a position where they can pay to pass, and pass well. It barely needs unpacking; the thought of being referred by your doctor because they’ve paid for their qualification can’t sit well with anyone.

George claimed that only one in five lawyers are clean, and that anyone that ruffles feathers is quickly muscled out. I asked about the government’s position: what are they doing to address this social decay? George was resigned: the vestiges of communism cling tightly; inflation charges on, and the ones who can afford the shiny dreams of the mall avoid any change that might threaten their place on the ladder.

I only stayed two days in Odessa but for all its surreal factors it was a rewarding experience – and touching, to be so well cared for by those who owed me nothing and had little to spare. I slept on a blanket on the floor, part of the poverty for the night but well aware of my relative wealth, trying to ignore the noise of George’s guinea pig as it rustled in the dark.