This feature was originally published in the November 2013 edition of High Times under the title “Kief in the Rif” – a typo mistaking the incredibly harsh Moroccoan kif for the luscious kief crystals that give Mary J her famous kick. But what are you going to do? It’s High Times for chrissake. 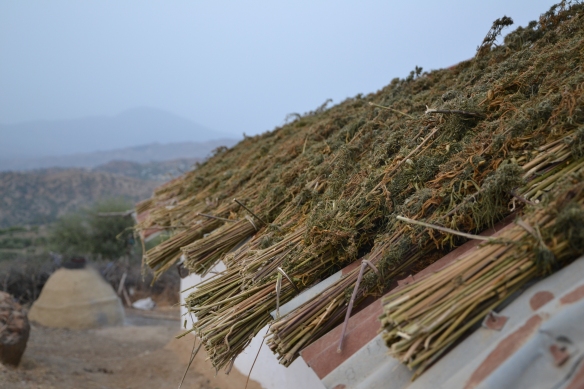 The last strands of smoke hang in the air. The air is hot and still, movement lethargic as the man next to me slowly exhales. He leans back, all distant smiles and ephemera, before abruptly ejecting the grey ember from his pipe and onto the floor. They aren’t much for ashtrays, these Moroccans.

It is 2.11am in the dusty outpost of Beni Ahmed. The last game of bingo draws close to completion and Mohammad curses under his breath – hemar! It has been a long evening in the dusky confines of the café and luck has been recalcitrant for our young host.

With an exasperated grunt he stands, tipping the stone markers onto the floor. “Come. We go now.” The red lights on the ATM clock outside still read 32°C and we wander down the empty street, unsteady from hash and boredom.

I had arrived two day earlier in a shared taxi. It had been hot again – mid 40s – and the old Mercedes struggled to keep up with the hellish pace. We stopped at a roadside well and the other passengers drenched their faces, rinsing their mouths with water before carefully spitting – for even water is forbidden during the fasting of Ramadan. While the driver placated the engine’s steaming rattle with the cool liquid one of our fellow passengers gestured out at the plots of green pockmarking the dusty landscape below. “Mirar amigo. Cannabis, si?” 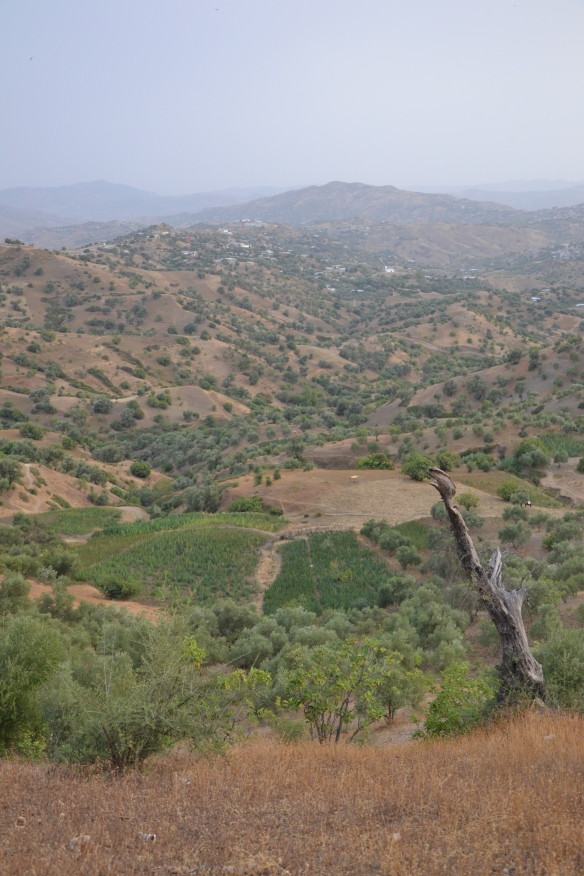 Si indeed, for we were deep in the Rif Mountains, an hour or so from Chefchaouane and surrounded by the arid terrain that produces Morocco’s infamous marijuana. It is this marijuana that will later find its way across the Straits of Gibraltar and up into Europe, smuggled as condensed hash, destined for sale on Parisian street corners and in Dutch coffee shops. I nodded at our self-nominated tour guide – always nice to meet a local keen to share their appreciation for the region’s top export.

We pulled back out onto the road and I steadied myself for another round of real-life chicken, metal carrion competing for the single lane of seal.

Impending breakdowns and complaining tires aside we arrived unscathed and were met by our couch surfing host, a polite young man named Mohammad. We dropped our bags at his family home and using Mohammad as an interpreter, tried to explain to his mother that we would like to wait until the Iftar, and break the day’s fast with them as a family. 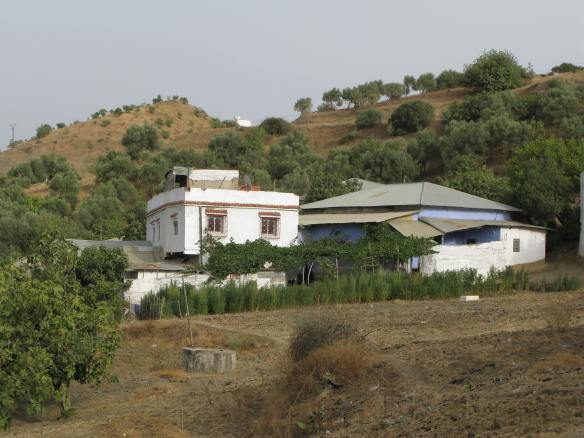 Our good intentions were well received but ignored, and our hosts rolled out the hospitality Moroccans are renowned for: delicious tomato and onion relish, fresh orange juice, and bread with a cardamom and cumin spiced sauce. Mohammad was hungry and removed himself while we ate, explaining that he is a good Muslim but that it is easier to resist temptation when it remains unseen.

After eating we got to chatting and Mohammad told us a little bit about life in the village. Given the area’s reputation it wasn’t overly surprising to discover that he is a ganja farmer, and like his father and his father before him makes a living tending the crops barely hidden from the main road and its prying eyes.

Shortly after this revelation Mohammad took us down to the Gendarme Royale for “registration”. I was naturally suspicious and, unsure what we were there for, gave fake names for my parents then tried not laugh as the cop stutteringly misspelled them. This bizarre admin out of the way and we were free to go, Mohammad explaining that it was just a precaution to cover their ample backsides should something happen to us. I left the obvious question hanging and asked if they knew about the weed. Mohammad laughs: “They asked if you were here to smoke when we showed up.” 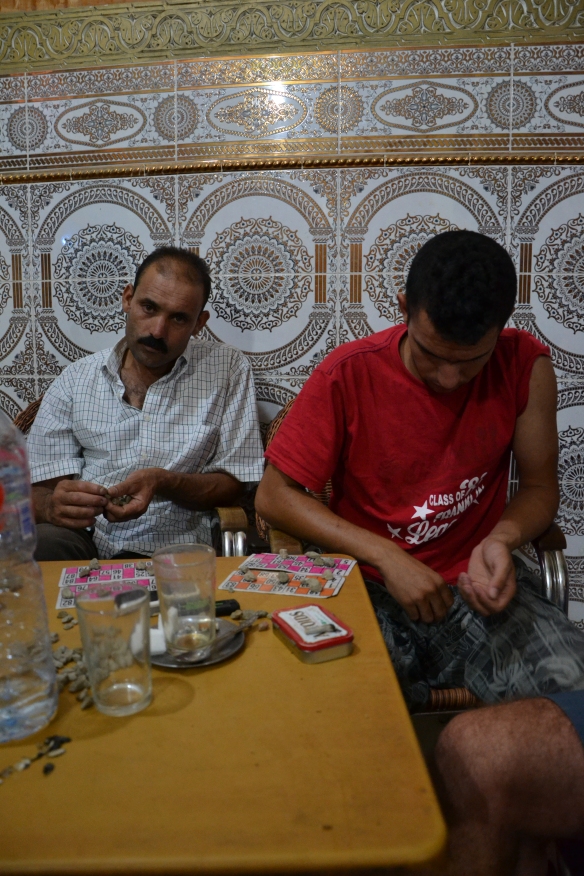 This seems an all too familiar case of corruption, the cops just one group content to grow fat on milk from the cash cow of illegality. That evening, sipping mint tea in a small café, Mohammad boasted of the drug’s ubiquity to us, detailing the lavish trappings used to keep soldiers interested while bosses stockpile riches.

His grandfather sat behind us with some of the local bigwigs and Mohammad discretely pointed out the boss of the local area’s operation – a large set man, balding, with sunken eyes and an absence of amusement. The cops’ precautionary involvement hung in my memory, and I was only brave enough to sneak a brief glance.

Mohammad is very proud of his grandfather, and told us how his service fighting Algerians in the northern deserts earned him some immunity from searches and checkpoints – allowing him to act as a cash mule and move up the ranks. He waxed lyrical about the extravagances at the top: imported hummers with no papers, flashy watches, and the extraordinary tale of how the local boss paid to sleep with an unnamed Moroccan pop star. Whatever the degree of truth to his tales it is clear that these are powerful men, and that the myths of wealth have lost none of their allure.

Beni Ahmed is a simple town: the roads are dirt and shops few and far between. There are no extravagances to be found amidst the olive trees, concrete houses or run down cars. Myths can be deceiving and whatever wealth weed brings is slow to trickle down. 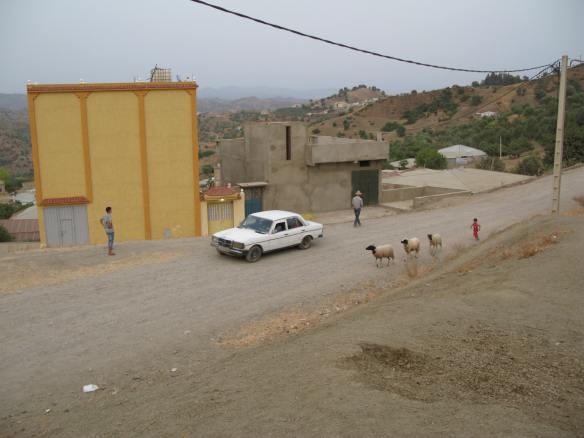 Marijuana remains illegal in Morocco and occasional government crackdowns can have dire consequences for a community so dependent on its cultivation. Mohammad told us about the government sanctioned strikes in 2010, where Air Force helicopters selectively ruined crops with pesticides.

“This was a bad year man, very bad year… no money.”

Despite this looming threat the community persists and weed, all of fairly average quality, is everywhere. Mohammad told us that it is the only way to make money there but when I finally got to see a plantation the overall quality was disappointing. While respectable in size the plants are more bush than bud and males pollinate unabated amongst the females. The final product is your typical bush weed: nearly all stems and sticks. I hadn’t the heart (nor nerve) to tell Mohammad how much better his crop could be if he adopted some more modern farming methods.

In the end it doesn’t seem to matter, for them. Most plants are turned into the infamous hard brown hash you find in Europe, the large plastic bag behind the door in Mohammad’s house more than corroborating his claims of multiple plantations. The rest are cut up, seeds, stems and all, into the local’s narcotic of choice – the unbelievably harsh kif. It is this kif, smoked through a long thin pipe with a clay cone, that has kept me occupied the last three nights while Mohammad throws good dirham after bad. 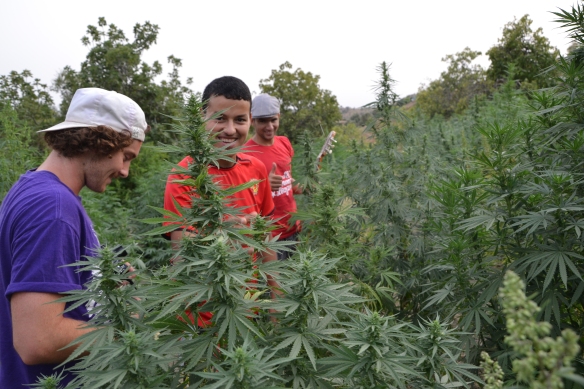 There are no women in the crowded coffee house and in their absence the men display a surprisingly homoerotic level of affection, hanging off each other’s shoulders and strategising about the non-existent nuances of bingo. I sit, removed from the proceedings in more ways than one, left to play mental bingo over what they might actually be saying.

The first night at the table had been generally positive. I made a stuttering attempt to learn numbers in Arabic, and made friends over the non-verbal ritual of kif. The practiced hands laughed as I coughed, and smiled at my waxed moustache, gesturing like they were racing a motorbike. I shook hands with countless strangers keen to meet the newest attraction in the village and drunk mint tea til my teeth were saturated with the sugar.

By the third night the novelty of my foreign status had well and truly worn off. I was just part of the background, forced to cultivate patience amidst a din of shouted Arabic and cluttering cups. In a place like this you are more hostage than guest, and when your host turns out to be hopelessly addicted to gambling there is little you can do but wait.

We arrive back at Mohammad’s family home just in time for Suhoor, the final meal before daylight and its associated fasting. As we lie on the roof terrace of his family’s modest house, preparing to sleep, I ask Mohammad if he can imagine a life without weed. After all, he is the only English speaker in town – a fact he is very proud of – and doesn’t seem to smoke kif himself. Would there not be other opportunities for him? Again he laughs – in Beni Ahmed a life without weed is inconceivable. 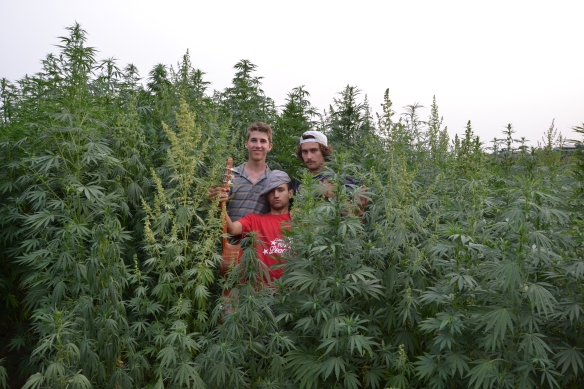 Obligatory G’s up – Thanks to Mohammad and his family for all their hospitality – Jah bless.